Results — Gender mainstreaming in the Dutch ministry of Foreign Affairs

The purpose of this evaluation study was to examine the extent to which gender aspects have been taken into account in policy development, implementation and evaluation.

In 2015, the Policy and Operations Evaluation Department of the Dutch ministry of Foreign Affairs (IOB) published its report Gender sense & sensitivity: Policy evaluation on women's rights and gender equality (2007-2014). This policy evaluation dealt with the Dutch international gender policy and its three, mutually reinforcing, elements: (i) strengthening women’s and civil society organisations that are committed to women’s rights and promoting female leadership; (ii) gender diplomacy and (iii) gender mainstreaming, which integrates a gender perspective throughout the policy cycle, i.e. in the preparation, design, implementation, monitoring and evaluation of all policies, regulations and expenditures to counter unconscious and/or structural inequalities between men and women (see figure 1). The report concluded, amongst others, that the ministry had not shown sufficient leadership and had lacked the knowledge, skills and means to really put the Dutch gender mainstreaming policy into practice. IOB’s first recommendation was therefore that the time had come ‘to move beyond rhetoric and to start making gender mainstreaming ... a reality and that gender issues should be included in the design and implementation of all policies, programmes and projects, and not just in those dealing with women or sexual reproductive health and rights’.

How and to what extent has gender been mainstreamed in Dutch foreign policy and development aid and what do we know of the results accomplished?

Now five years later, IOB investigated what follow-up has been given to this recommendation. Using the policy cycle as the framework, this document captures the main findings of this evaluation that addresses two main questions: (1) How and to what extent has gender been mainstreamed in Dutch foreign policy and development aid since 2015 and what do we know of the results accomplished? and (2) Which actions does IOB recommend to undertake in order to further enhance gender mainstreaming throughout the Ministry?

The Dutch international policy on gender equality and women’s rights has not experienced major changes since 2015. It continues to underscore the importance of women’s rights as human rights and equal opportunities for women and girls in political, economic and societal processes are seen as a condition for sustainable development. Like at the time of the previous evaluation in 2015, the Dutch international policy on gender equality and women’s rights still consists of three main components: (i) gender diplomacy; (ii) support for women’s organisations and (iii) gender mainstreaming, especially in Dutch development assistance policy. As in the past, gender mainstreaming is generally focused on the objective of involving more women and girls in decision-making bodies or as project beneficiaries. It is only within the framework of Dutch human rights and women’s rights policies, programmes and projects that the more fluid gender identities such as transgender or non-binary identities receive detailed attention.

In terms of policy areas, there is an emphasis on (political) decision-making and female leadership, economic empowerment, violence against women and girls and the role of women in conflict prevention, conflict situations and peace processes the thematic focus. This has changed little since 2015 as well. While there is more attention for the link between gender equality, women’s rights, inclusiveness and intersectionality, this is not yet consistent. Addressing the power dynamics between men and women remains challenging.

The TFVG is responsible for gender diplomacy, managing women’s projects, programmes and partnerships and promoting gender mainstreaming. Gender focal points are its antennas for mainstreaming in thematic departments and embassies. This institutional set-up is generally viewed positively by policy officers across departments. Still, some key issues require attention: (i) institutional embedding of the TFVG has not been conducive to advancing gender mainstreaming outside the directorate general for development cooperation; (ii) the TFVG is small, especially its capacity to carry out its gender mainstreaming tasks; (iii) there is no task description for the (voluntary) position of gender focal point (GFP), there are no formal prerequisites to be nominated as such, while focal point tasks come as an add-on to other responsibilities and there are different interpretations of what the GFP-role is; (iv) there is insufficient interaction among the GFPs to allow the GFP-network to further improve the ministry’s gender mainstreaming performance. While accountability for gender mainstreaming is important, opinions differ on the question what people in the ministry can be held accountable for. While the international literature has underlined the importance of accountability for gender mainstreaming, efforts to include it in the appraisal cycle of the ministry’s management have not been successful.

Both senior management and ministry staff agree to the importance of women’s rights and support gender mainstreaming. While the TFVG offers training, guidance materials and external gender expertise, more practical hands-on information and examples are needed. Since the training is not mandatory, it is questionable whether it contributes to mainstreaming gender awareness among staff who are less familiar with the subject or to changing the attitudes of the few that are indifferent.

Gender analyses are increasingly done but the quality strongly depends on the expertise of the individual employee. At country level, attention for women’s rights and gender equality does not necessarily translate into a gender mainstreaming strategy or gender equality goals – evaluations of projects and programmes confirmed this finding. The TFVG offers advice on how to conduct such an analysis but a better understanding is needed of how the gender analysis influences the subsequent stages of the policy cycle, including evaluation design.

TFVG could offer training, tools and best practices of high-quality gender analyses and hands-on advice on how to conduct gender analysis and organise a process of quality control of this type of analysis. Make sure that results of gender analyses translate into a strategy, activities and resources that are needed to address women’s rights and gender equality.

Compared with 2015, the ministry increased the share of projects with gender equality as a significant objective or with gender equality as the principal reason of an intervention (the OECD-DAC gender equality policy marker) to over 75%. Scoring on the marker for the different development cooperation sectors remains variable, with some sectors scoring above average, with scores in areas such as banking and financial services, employment creation, and emergency response showing improvement but lagging behind in the areas of conflict, peace and security and human rights. However, whether a better score really reflects more attention to gender on the ground is not evident: the gender marker reflects donor intentions at the design stage.

The results frameworks for the different development sectors show an almost exclusive focus on women and men as mutually exclusive categories, and a focus on the quantitative number or percentage of women that is expected to participate in or to profit from certain types of activities. At times, indicators are overly complex, key monitoring terms are not explained, insufficient distinction is made between outcome and output indicators and attention for indicators with a more (qualitative) gender-transformative character is limited. That the ministry is expected to report annually on higher policy goals such as changes in norms and values and changes in behaviour shows little consideration for the fact that fundamental changes in gender equality take much longer than the typical lifetime of projects, programmes or partnerships of 4-5 years at most.

Evaluations conducted in the period 2015-2019 have used a variety of gender approaches, but often fail to clearly define the concepts that they use. IOB’s analysis of 92 evaluation reports furthermore shows the following: 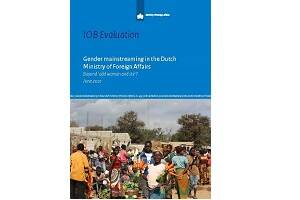