IOB has evaluated the policies and activities of the Dutch government aimed at strengthening tax systems in developing countries in the period 2012-2020. This page contains the evaluation report and provides the recommendations and supporting evidence of the evaluation. The report builds on research conducted by IOB, as well as on sub-studies conducted by CPB, SEO, and Craig West that were commissioned for this evaluation.

Around 2010, following the financial crisis and the growing media attention for the tax practices and ethics of multinational enterprises (MNEs), the G20 started to discuss the issue of international taxation, with the specific aim of preventing base erosion and profit shifting (BEPS) that provided tax avoidance opportunities for multinationals. This OECD/G20-led initiative also explicitly signalled issues and challenges faced by developing countries, both their need to increase tax revenues to foster long-term development as well as their inability to address issues of tax avoidance by multinationals due to their capacity constraints.

The Dutch government recognised the risks of BEPS and supported this OECD/G20 initiative. The initiative, together with capacity development provided by the Netherlands to improve tax systems in developing countries and unilateral measures introduced by the Netherlands to counter tax avoidance were the three topics that formed the Action Agenda on Policy Coherence for Development (PCD agenda), launched in 2016. In 2018, countering tax avoidance by MNEs and improving domestic resource mobilisation in developing countries were added as the twin goals of the PCD agenda.

How coherent and relevant are Dutch government policies and activities on strengthening tax systems in developing countries, and what are their effects?

The first sub-goal of the PCD Agenda aims for improved international standards on taxation of real economic activities. Working within the framework of the European Union (EU), the Dutch government aims to i) design international standards to counter tax evasion and avoidance which take account of the interests of developing countries and ii) the resulting adjustments made to its own tax policies.

During the period reviewed, the Netherlands financially supported activities by ATAF and the OECD to identify these priorities and although they showed some discrepancy with those of developed countries, the Netherlands insisted that they were similar and that it did not need to change its own position.

In general, the inclusion of the priority issues of developing countries in the BEPS actions was limited to those that overlap with those of developed countries. Despite the substantial overlap, especially with respect to limiting interest deductions, preventing tax treaty abuse and transfer pricing issues –  (all of which are considered to be important developing countries) – neither tax incentives nor the taxation of indirect transfers were  included in the BEPS actions.

In ongoing and future negotiations it is therefore necessary for the Netherlands to test this assumption about developing countries’ priorities, especially in relation to the BEPS 2.0 project, which addresses the discussion on source versus residence taxation in a digitising economy – an issue of particular importance to developing countries.

To test whether the priorities of developing and developed countries are similar, the priorities must be identified using the four channels already available: i) the round table with representations from the Ministry of Finance, Ministry of Foreign Affairs, NGOs and employer organisations, ii) the OECD Informal Task Force on Tax and Development; iii) the UN Committee of Experts on International Cooperation in Tax Matters; and iv) available literature regularly published by international organisations.

Sub-goal 2: decrease MNEs’ use of the Netherlands’ tax system as a tax avoidance conduit

The second sub-goal of the PCD Agenda aims for a decrease in the use of the Netherlands as a conduit for tax avoidance in other countries, including developing countries. It is the Dutch government’s policy to strive to include anti-abuse clauses in tax treaties with developing countries and to take extra measures against financial flows to low-tax jurisdictions.

The articles in bilateral tax treaties between the Netherlands and developing countries on dividend, interest and royalty withholding taxes and the article on permanent establishment (PE) all contain thresholds, exemptions and/or definitions which limit or expand their scope. In general, developing countries try to limit exemptions to withholding taxes and to broaden the definitions of these taxes, while the Netherlands strives for the opposite result, which can partly negate the tax revenue effects of higher withholding tax rates.

The timeline of withholding taxes based on all tax treaties of eight developing countries investigated for this evaluation reveals that in recent decades there has been a consistent downward trend in withholding tax rates for all payment categories, dividend, interest and royalty payments. The  decreasing trend in withholding tax rates can potentially increase the risk of tax revenue losses in developing countries because the Netherlands uses a benchmark treaty as an upper limit on its negotiation result. Concluding a tax treaty with the Netherlands can provide multinationals with opportunities to use the other strengths of the Dutch fiscal climate.

Sub-goal 3: Structural capacity building for good tax policies and tax collection in developing countries (with a focus on low-income and lower-middle income countries)

The third sub-goal of the PCD Agenda aims for providing structural capacity building for good tax policies and tax collection in developing countries.

In practice, support is mostly limited to the 15 partner countries mentioned in the 2013 policy document ‘A World to Gain’ and is the result of a largely demand-driven process, although somewhat limited to an extensive list of possible topics that reflects the expertise of the implementing parties National Tax and Customs Administration (NTCA), IBFD and VNG. Especially relevant from a coherence perspective are criteria related to development partner countries and countries with which the Netherlands has a tax treaty. Therefore, these criteria should be reassessed to specify which support will be provided to which countries, why and for how long, as this will help improve the relevance and sustainability of capacity development support. To ensure capacity development is sufficiently aimed at the issues most relevant for developing countries, tools like TADAT should be used more consistently to distinguish between and select capacity development programs at national level.

The bilateral capacity development support provided by the Netherlands via the programmes of the NTCA and IBFD (and the VNG) is expected to operate in identified niches and complement the comprehensive programmes of larger multilateral institutions or bilateral donors active in the supported countries that are often embedded in public finance reform programmes. So far, the added value of these bilateral capacity development programmes has not been clearly defined and substantiated. The added value should be stated more clearly and should be based on the expected effects on taxation. In addition, the Netherlands could argue for bilateral capacity development support if longer-term programmes are expected to play a role in broader bilateral efforts to strengthen the enabling environment for the private sector and economic diplomacy by the embassies in these countries. In view of the small budgets of the bilateral programmes that were active in 24 different countries in the evaluation period, it would also be advisable to restrict support to a select number of countries.

The available reports on capacity development activities do not specify the effects of the interventions. More insight into the effects of bilateral support, combined with specifying  the circumstances under which capacity development support is expected to be relevant would make it easier to determine to what extent the expectations have been met. As the bilateral capacity development support is fragmented and small, a monitoring and evaluation policy should be limited in scope. A first step could be identifying participants for training and workshops and following them to analyse whether how they use their improved skills is in line with the support provided. A second step could then be to analyse how much they apply the knowledge they have acquired in practice.

Coherence of policies and activities under the three sub-goals

The available policy documents on the stance the Netherlands has adopted for negotiations on international taxation and treaty negotiations provided limited insight into how the interests of developing countries were included. There should be greater transparency on the decision making, i.e. how the information collected on the interests of developing countries is assessed and used to inform and guide the Netherlands’ negotiation stance. This could be achieved by involving the Ministry of Foreign Affairs and informing stakeholders, including the House of Representatives, more consistently on the stance the Netherlands intends to take during negotiations and why. This analysis should also be included in mandates and/or reports on the negotiation of international standards and tax treaties. For the Ministry of Foreign Affairs to play a more prominent role and contribute more meaningfully to discussions, it will need to have additional fiscal expertise.

Most of the indicators used in the annual report on the progress made with respect to the Agenda on Policy Coherence for Development are either too general or too difficult to monitor to produce meaningful and credible information for guiding policy. Some of these indicators do not measure actual results. The indicators should therefore be made more meaningful, i.e. they should measure progress towards achieving the goals specified in the Agenda on Policy Coherence for Development. They should not be restricted to, for example, the inclusion of anti-abuse clauses in tax treaties but should also investigate their invocation and impact on fighting tax avoidance and the negative effects of the conduit role of the Netherlands.

At the same time, the indicators should be more realistic and their scope restricted to measuring progress towards achieving these goals instead of only considering the impact of the goals if this is difficult to measure and/or attribute to Dutch interventions, as is the case for tax-to-GDP ratios in developing countries. The reconstructed Theory of Change used in this evaluation could be used and refined to specify which results are expected at what level; the indicators can then be designed accordingly. 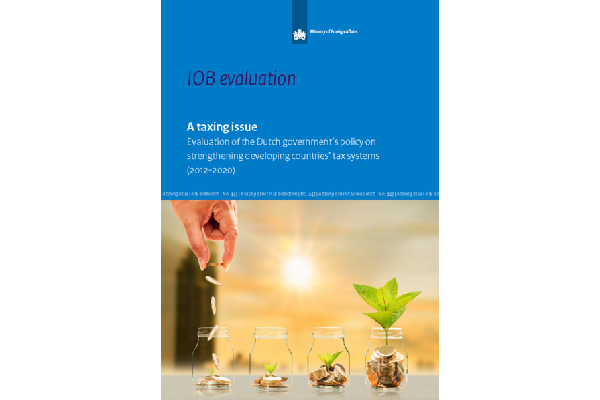