Results — Implementation of the aid, trade and investment agenda in 3 partner countries: Bangladesh, Ethiopia and Kenya

A study on the integration of the aid, trade and investment policy in Bangladesh, Ethiopia and Kenya, with a focus on possible synergy and coherence in implementation. This page provides the most important conclusions and recommendations.

In 2012, under the Rutte II cabinet, a new ministerial post was created: the Minister for Foreign Trade and Development Cooperation. Dutch development cooperation, trade and investment policies were combined for the first time into one policy agenda. This was expected to generate synergy and benefit both the Netherlands and recipient developing countries. The policy paper ‘A world to Gain’ (2013) defined three central objectives: 1. eradicate extreme poverty in a single generation; 2. sustainable, inclusive growth all over the world; and 3. Success for Dutch companies abroad.

The implementation of the aid, trade and investment policy was shaped differently in the three selected partner countries. Several reasons explain the different approaches chosen...

All three countries have been confronted with political tension, regional insecurity, terrorist attacks, natural disasters and climate change, albeit in varying degrees. Yet, what varies between the countries is the presence of natural resources, the size of their domestic markets, other locational advantages, linkages to global supply chains, the governance and competence of the recipient government, and the risk of corruption. These factors provide the canvas on which Dutch policy has had to be implemented and explain the varying approaches chosen.

Although the Netherlands has good diplomatic relations with all three partner countries, the level of cooperation with recipient governments varied. Different political and institutional settings in the partner countries resulted in different channels being chosen for disbursing ODA.

Although Dutch policy interventions have overall been aligned with partner countries’ policies and priorities, this varied somewhat for the three countries.

With the introduction of the new policy, neither a well-defined framework on the transition, nor an underlying Theory of Change for the integrated agenda were provided. Embassies were primarily in the lead to translate policy into concrete action, resulting in unique approaches.

Differences existed in available financial resources, personnel, and time given to implement the new agenda and transition (the ‘phase out date’). For all three countries is the shift of available resources and tilting influence of development cooperation from the delegated to the central level.

To implement the new agenda, Dutch development cooperation for the three partner countries included more focus on PSD, albeit to different extents.

For example, enhanced embassy spending on PSD-related aid programmes was most evident for Kenya and, to some lesser extent, Bangladesh. In contrast, enhanced focus on PSD was not visible in the development cooperation portfolio of Ethiopia. This is explained by the embassy’s strategy, identifying a continuation of development cooperation – serving aid objectives such as food security – in the long run.

Central expenditure (including via instruments of RVO) also showed enhanced focus on PSD in aid programmes. Social development remained an important share of the central ODA expenditure, but a shift has been visible to increased spending on PSD and – to some extent – on promoting trade and investment.

Interventions to support (enhanced) trade and investment occurred along two tracks: providing direct support to individual companies and activities to enhance the enabling environment. Examples of trade and investment promotion included, for example, economic diplomacy, trade missions and the PSD Apps. The two-track approach was applied in all three partner countries, they were also unique in their implementation. Various stakeholders have identified the added value of the embassy in these interventions.

In terms of portfolio organisation, embassy’s development cooperation interventions have shown enhanced integration of aid policy on the ground, linking spearheads and focusing on themes such as water, agriculture and SRHR. Nevertheless, integrating trade and investment objectives into development cooperation programmes has been a daunting – and at times impossible – task.

The geographical focus of several aid programmes in poor areas was well justified from a poverty perspective, but these areas were not the most promising from a business perspective.

The embassy funded food security programmes carried out in economically more advanced areas and with entrepreneurial farmers. It enhanced the probability of sustainable, commercial opportunities for Dutch suppliers, but it excluded subsistence farmers and farmers in poorer, drier and more remote areas.

Similarly, integrating aid objectives into trade and investment promotion has also been difficult, with little evidence of coherent approaches or successes so far.

5. Increased bilateral trade but no clear conclusions on the effects of policy interventions

To assess the implementation of the new agenda, bilateral trade and FDI patterns were reviewed. Unfortunately, FDI data was found incomplete and/or unreliable, thereby not allowing to be used for conclusions.

A gravity model based regression analysis compared to expectations and data for bilateral trade with other trade partners of the Netherlands was conducted to further review the development of bilateral trade relations at macro-economic level and whether Dutch interventions may have had an effect. These findings conclude that any effect that has potentially occurred has not been visible at macroeconomic level.

6. Limited coherence, coordination and alignment in interventions and policies

Implementation of the new agenda was marked by limited policy coherence and coordination. This was primarily caused by: the absence of clear overarching guidelines on how to effectuate the transition, the challenges encountered in integrating policy fields and the limited coordination between central and delegated interventions. The introduction of the multi-annual country strategy can provide a solution. It has the potential to improve information exchange and enhance coordination and integration of central and delegated programmes in all policy areas. 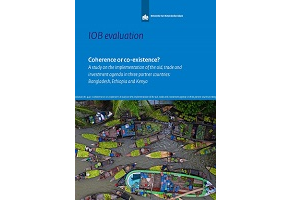