Over the past decade, the issue of climate change has played a prominent role in Dutch development cooperation and foreign policy. The Netherlands aimed to reach poor countries and target finance for adaptation to climate change. Did Dutch aid reach the intended countries, and which sectors and target groups benefitted? The Netherlands also used ODA to mobilise private sector finance. What was the additionality of these public funds? And what should future climate finance look like? This evaluation, as part of a larger set of studies on climate change policy, provides answers to those questions.

Climate action has become an important and urgent topic on the international agenda  - culminating in the Paris Agreement - and climate finance to support developing countries is a crucial instrument for action. The Netherlands committed itself to contributing to the joint objective of supporting developing countries with at least 100 million USD a year from 2020. It aimed to reach poor countries and target finance for adaptation to climate change. Did Dutch aid reach the intended countries, and which sectors and target groups benefitted? The Netherlands also used ODA to mobilise private sector finance, blending public and private funds. What was the additionality of these public funds? And what should future climate finance look like: should donor countries use ODA, mainstream climate into assistance and/or green all of their policies and financial flows? This evaluation, as part of a larger set of studies on climate change policy, provides answers to those questions.

The Netherlands estimated its own ‘fair share’ in the global commitment to support developing countries at EUR 1.25 billion annually from 2020. Climate finance has steadily increased, reaching EUR 581 million public and EUR 752 million mobilised private sector finance in 2019. The Netherlands is on track towards its fair share objective, thanks to an increase in mobilised private sector finance.

Dutch data on climate finance in development cooperation is fragmented. There is no single database or single information source that gives a complete overview of Dutch climate finance, disaggregated by country, distinguishing adaptation and mitigation, and including the mobilised private sector finance.

The target groups mentioned in policy notes - women, poor and vulnerable groups, farmers and youth - are not consistently included in project design, approval, monitoring and reporting. In particular, gender is identified as a priority in Dutch development policy and in programme and funding design, but these intended results are rarely confirmed in evaluations and gender is not consistently mainstreamed.

2. Additionality of ODA in blended finance for climate action

For this study, we developed a conceptual framework that distinguishes between the different private sector development phases that a successful development project may pass through: from innovative ideas (new products or new markets) with an uncertain, risky business case, to mature, less risky business cases, ready to be scaled up commercially.

We find three categories of projects:

A successful initiative ideally moves from an innovative idea to a commercial project ready to be scaled up. However, in practice, the different instruments funded by DGIS, which include non-revolving programmes and revolving funds, insufficiently support this graduation from innovation to commercial upscaling.

Not all climate action can be supported by blended finance. Blended finance fills a niche of temporary support between what can be funded commercially and what requires continued public support.

Following international and Dutch commitments to the Paris Agreement and earlier climate agreements, work to increase support for climate action in developing countries is needed at three levels simultaneously, which we present here in three pathways: (i) dedicating climate finance for development, (ii) mainstreaming climate into development assistance, and (iii) aligning all policies and finance flows to climate objectives.

An internationally agreed, overall needs assessment for climate finance has been lacking. The UNFCCC is currently drafting a Needs Determination Report to improve methodologies for needs assessments. If climate action were based on the needs indicated in developing countries’ plans, it would focus more on results, rather than financial input targets – and it would also increase Southern ownership.

The second of the three pathways is to align all development assistance with the climate objectives in the Paris Agreement. ODA-funded activities can be climate-relevant, climate-sensitive (doing no harm) or climate blind. Currently, a substantial part of Dutch development assistance is climate relevant, but we have not assessed whether there are other ODA activities that have negative effects.

The Paris Agreement aims for the alignment of all policies and all financial flows to climate objectives, beyond development cooperation. Governments can promote private sector engagement and help create an enabling environment for green investments in developing countries. Experts and critics call upon governments to abandon incoherent domestic policies, for instance favouring fossil fuel use, and harmful trade and agriculture policies. Aligning (greening) all policies will affect all financial flows, including private ones – and they are much bigger than development assistance. 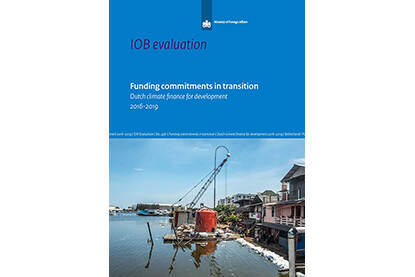