Post-mission evaluation of the integrated police training mission in Kunduz

Between 2011 and 2013, the Dutch ‘integrated police training mission’ took place in Afghanistan. Its aims were to help strengthen the Afghan civilian police and the justice system, particularly in the province of Kunduz. IOB’s ‘post-mission evaluation’ assesses the extent to which these mission aims were achieved five years after the end of the mission, and also analyses what did and did not work well during the mission. Based on this, IOB offers six recommendations for future missions. 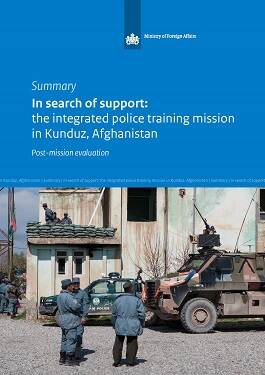 This document summarises the main findings and recommendations of the study. The full report (in Dutch) can be found on the Dutch site. The research for this evaluation consisted of five separate components. Three of these are published as separate reports (in English), see attachments.

If you have any questions, please contact Wendy van der Neut via wendy-vander.neut@minbuza.nl.